Light vanilla sponge, cream cheese frosting studded with roasted hazelnuts and a creamy chocolate ganache. Oh, and did I mention I soaked the sponge in vegan Irish cream too? Let’s bake!

After three, yes, THREE failed attempts at the traditional Christmas chocolate roll, I decided to make this easy ‘cheat’ version. I made my plain vanilla sponge recipe which never fails, and cut it into rectangles rather than rolling as per the traditional recipe. Technically, it is no longer a yule ‘log’ but we will go with it! 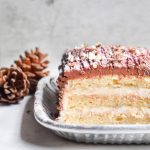 For the cream cheese buttercream

Vegan mac and cheese 🧀 A healthier version of t

One of the most popular recipes on my blog last mo